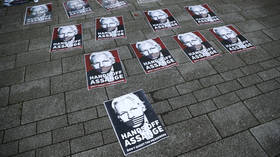 Assange was allowed to make just a single call from the maximum security Belmarsh prison in southeast London for the Christmas holiday, hoping for a reminder of the world beyond his drab confines of steel and concrete.

"I think he simply wanted a few minutes of escape" and to revive "happy memories," Smith told RT, adding that Assange had spent the holiday at his home in 2010. The brief conversation was far from cheerful, however, with Assange's deteriorating condition increasingly apparent throughout the call.

He said to me that: 'I'm slowly dying here.'

"His speech was slurred. He was speaking slowly," the journalist continued. "Now, Julian is highly articulate, a very clear person when he speaks. And he sounded awful… it was very upsetting to hear him"

Though Assange didn't say it out loud during the call, Smith said he believes the anti-secrecy activist is being sedated, noting that "It seemed pretty obvious that he was," and said others who visited Assange were of the same opinion.

Smith isn't the first to raise this issue, but British authorities have so far refused to divulge whether Assange has been given psychotropic drugs in prison, insisting only that they aren't "mistreating" him. But given that he is "being kept in solitary confinement for 23 hours a day," with requests by numerous doctors to examine his physical condition denied, Smith said he has a hard time taking the officials at their word.

"Julian was extremely good company over Christmas in 2010," the journalist said, but the man he talked to on the phone last week sounded like a different person. "I just don't understand… why he's in Belmarsh Prison in the first place. He's a remand prisoner. He's not a danger to the public."