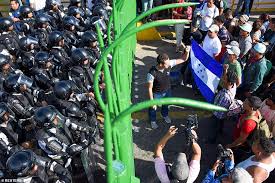 Migrants clashed with Mexican troops on a bridge at the Guatemalan border on Saturday, as hundreds of guards also lined the banks of the river to prevent further crossings there.

Thousands of Central American migrants tried to push their way across a bridge spanning the Suchiate River between Mexico and Guatemala.

Honduran migrants waved their country's flag and sang the national anthem as they approached the bridge. At the height of the confrontation, Guatemalan authorities estimated 2,500 migrants were on the bridge, or attempting to get on it.

Scuffles briefly broke out as a group of several hundred mostly Honduran migrants pressed forward to cross, only to be pushed back by security forces.

Scores of people who entered Guatemala from Honduras in recent days have been arriving at the Mexican border, with the bulk of them still advancing in a larger caravan, testing the resolve of Mexico to heed US demands to contain migrant flows.

Hundreds of guardsmen lined the river to prevent migrants from crossing into Mexico clandestinely. The voice on the loudspeaker warned, over and over, that those aiming to transit through Mexico may not be granted asylum in the U.S., even if they make it there.