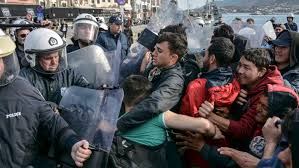 The European Union, including the United Kingdom, funnelled billions of euros to the Islamist government in Ankara in an effort to persuade it to bring the migrant crisis under a modicum of control after hundreds of thousands of illegal border crossings, often by sea, in 2015-16.

That deal unravelled at the end of February 2020, as Turkish president Reep Tayyip Erdogan announced migrants were free to pass through his country and into Europe, seemingly as punishment for the West's failure to offer sufficient support to his invasion of Syria, which has become fraught with danger as his forces clash with the Russian-backed Syrian government in Idlib province.

"Right now, let's be honest, the [EU-Turkey] agreement [on migration] is dead," said Greek prime minister Kyriakos Mitsotakis in an interview with CNN.

"And it's dead because Turkey has decided to completely violate the agreement, because of what happened in Syria," he added.