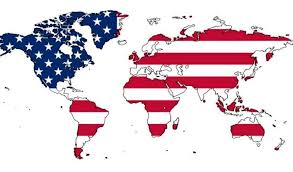 A people and national government that fancies itself exceptional – an example for the rest of the world – is apt to assert itself militarily, economically, and culturally around the globe. If that self-righteous state happens to possess prodigious power, as the U.S. has since the Second World War, then any perceived success will lead to a sense of triumphalism, and thus put into motion a feedback loop whereby national "achievement" justifies and validates that conception of exceptionalism.

Then the exceptionalist-triumphalist power inevitably runs off-the-rails, and – especially when it feels threatened or insecure – lashes out in fits of aggressive military, economic, religious, or racial chauvinism. This cycle tends to replay again and again until the empire collapses, usually through some combination of external power displacement and internal exhaustion or collapse.

Such imperial hyper-powers, particularly in their late-stages, often employ foot soldiers across vast swathes of the planet, and eventually either lose control of their actions or aren't concerned with their resultant atrocities in the first place. On that, the jury is perhaps still out. Regardless, the discomfiting fact is that by nearly any measure, the United States today coheres, to a remarkable degree, with each and every one of these tenets of empire evolution. This includes, despite the hysterical denials of sitting political and Pentagon leaders, the troubling truth that American soldiers and intelligence agents have committed war crimes across the Greater Middle East since 9/11 on a not so trivial number of occasions. These law of war violations also occurred during the Cold War generation – notably in Korea and Vietnam – and the one consistent strain has been the almost complete inability or unwillingness of the US Government to hold perpetrators, and their enabling commanders, accountable.