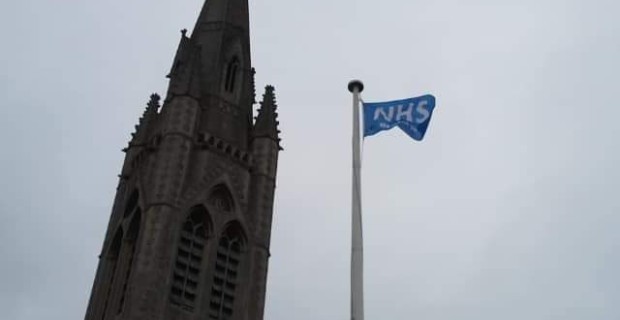 A Catholic Church in England has removed its Vatican flag and replaced it with an NHS flag, illustrating once again how the National Health Service is akin to a religious institution in the United Kingdom.

"My uni parish has taken down the Vatican flag and replaced it with…the NHS flag," remarked the Twitter user who posted the image.

My uni parish has taken down the Vatican flag and replaced it with…the NHS flag ???? pic.twitter.com/Mf1Mpt2WLa

The NHS flag is being flown by St John The Evangelist's Church, which is located in in the south-east section of Bath City Centre, one of Britain's most historic and iconic towns.

The worship of health workers amidst the coronavirus pandemic is stronger in the UK than any other country in the world.

Every Thursday at 8pm, people are encouraged to clap for health workers outside their front doors and balconies.

This has led to some people being publicly shamed on social media for failing to take part in the weekly observance.