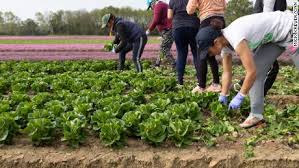 In a video posted to Twitter, Charles, the heir to the British throne, asked people to take on the "unglamorous" task of picking fruit and vegetables to help farmers.

"At this time of great uncertainty, many of our normal routines and regular patterns of life are being challenged," he said to the camera, promoting the UK government's Pick For Britain campaign, which is seeking to recruit students or people who have been furloughed.

"If we are to harvest British fruit and vegetables this year, we need an army of people to help," he said.

The Duke of Cornwall, 71, compared would-be pickers to the Land Army of World War II, where women and girls volunteered or were conscripted into undertaking agricultural work after many men left the country to fight.

"In the coming months, many thousands of people will be needed to bring in the crops. It will be hard graft but is hugely important if we are to avoid the growing crops going to waste," he said.