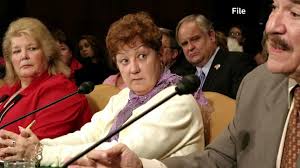 In a new documentary, made before her death in 2017 and due to be broadcast on Friday, McCorvey makes what she calls a "deathbed confession."

"I took their money and they took me out in front of the cameras and told me what to say," she says on camera. "I did it well too. I am a good actress. Of course, I'm not acting now."

"If a young woman wants to have an abortion, that's no skin off my ass. That's why they call it choice," she added.

"AKA Jane Roe," will be broadcast on the FX cable channel on Friday but was made available to television journalists in advance.

It traces McCorvey's troubled youth, how she became the poster child of abortion rights and her about-face in the 1990s when she announced she was baptized as a born-again Christian who campaigned against abortion.

The documentary was filmed in the last months of her life before her death at age 69 in 2017 in Texas.