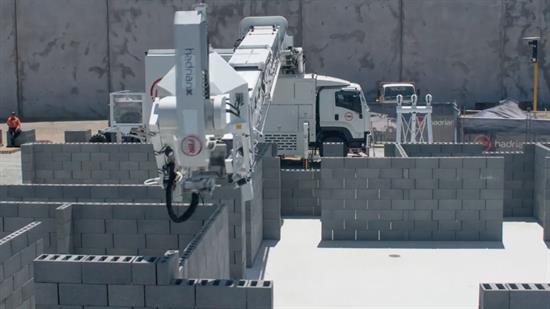 The engineers behind the Hadrian X have continued making software improvements and have now announced a new record brick-laying speed, which they say makes the robot commercially competitive with manual workers around much of the world.

The Hadrian X robot was created by Australian firm Fastbrick Robotics (FBR) and is named after the UK's Hadrian Wall. It features a telescopic boom that mounts to an excavator or truck, which is fed a 3D CAD model of a house and goes about placing bricks along with mortar and adhesive to build out the structure.

While the team has concept demonstrator robots designed to one day achieve laying rates of more than 1,000 bricks an hour, on the practical side things have been a little more slow-going. Software upgrades to the Hadrian X have seen it go from laying around 85 blocks an hour before the COVID-19 pandemic, to around 150 blocks an hour, and then onward to up over 200 blocks an hour.

This was demonstrated as a sustained laying rate during the process of a full house build, according to FBR, and puts the Hadrian X on course to compete with traditional bricklaying services.