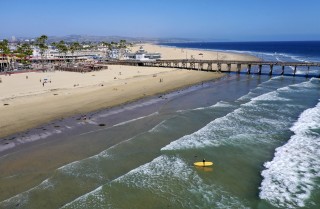 The county's public health department said in a statement that beaches will be off limits to the public from July 3 through July 6 at 5 a.m. to prevent the transmission of "deadly COVID-19," the disease caused by the CCP (Chinese Communist Party) virus.

Fireworks displays in the county will also be prohibited over the July 4th holiday weekend, the department announced.

"During the holiday weekend, beaches will be totally closed to all recreational activities. Beach parking lots will be closed as well," the statement read.

The news came as LA county reported more than 2,900 additional cases of the CCP virus on Monday, marking "the single largest one-day case count since the pandemic began," the department said.

Barbara Ferrer, the county's director of public health, said in a statement that closing the beaches and prohibiting fireworks displays during such an "important" summer holiday was an "incredibly difficult decision to make."

"But it's the responsible decision to protect public health and protect our residents from a deadly virus," Ferrer said. "The Fourth of July holiday weekend typically means large crowds and gatherings to celebrate, a recipe for increased transmission of COVID-19."

California Will Soon Be Paying $1,250 To People Who Test Positive For Coronavirus