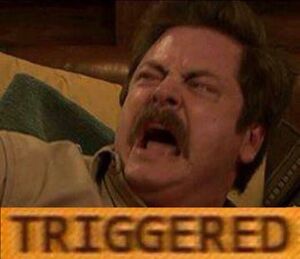 What is PTBO? According to the study, it's "a state-like tendency to be sensitive to customarily innocuous societal events and traditions," such as "playing of the United States' National Anthem," and is the "tendency to view an array of events and/or traditions as offensive." People with high PTBO "are likely to feel that social events or traditions to which they take offense also violate moral or equitable standards."

The study found that easily triggered people are less productive, are prone to view their organizations as "less fair," and "consume a lot of time complaining about trivial matters."

"The person offended by everyday occurrences diverts important and limited cognitive resources away from the client (and potential sale) towards a task-irrelevant stimuli."

While one might think the tendency to become triggered would suggest social justice warriors are the most altruistic and helpful within an organization - "as their prescriptive morality dictates helping and providing for others" - the study finds that people with high PTBO are less likely to engage in "citizenship behavior," and that "PTBO negatively correlated with task performance and positively correlated with counterproductive work behaviors, suggesting not only that these individuals engage in fewer citizenship behaviors but also engage in behaviors managers and organizations want their employees to avoid."