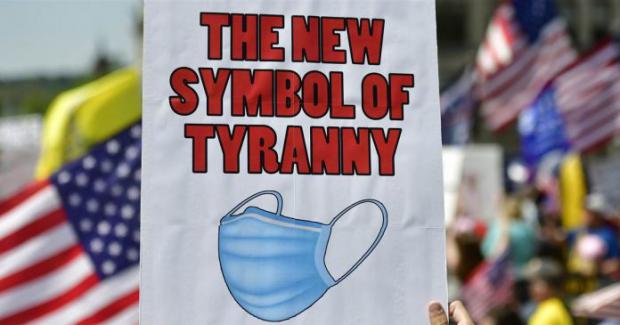 People ask – what can they do?

It seems everywhere you go, Diapering is demanded as the price of being permitted to live. You are told you may not enter a grocery store to buy food – much less a restaurant to eat (though you are permitted to remove the Diaper once seated because this is submission theater, not a public health measure).

In some areas, people are pressured to Diaper everywhere, even outside. The purpose of this is severalfold.

First, obviously, to maintain a state of hysteria in the absence of any reason for it. Life would be largely going back to normal by now if the populace weren't being terrorized by ululations about the "cases" – without any context, such as the Infection Fatality rate, which is about the same as that for ordinary flu (see the facts; chart is below). Almost all of the Undiapered aren't dying – mostly because they're still capable of walking  . . .without a walker.

The average age of those felled is nearly 80; the typical age is even higher. And it's not merely age but infirmity. The thing really felling most of those oldsters is  . . . oldness. That is to say, natural causes. There is a reason why people are in nursing homes. Most of these people aren't in general circulation to begin with – and they shouldn't be, for the same reason that people who can't swim should avoid the pool.

Instead, those who can swim are told – in effect – that they must not go near the pool. Pools must be treated as great dangers to all – and those who insist on going for a swim are a menace to those who cannot.

But the lie that everyone can't swim must be maintained – by forcing all to Diaper.

This, in turn, creates a state of general demoralization. It is demoralizing to see everyone Diapered – what you can see of them, that is. Not their faces – not their smiles, which have been banished along with practically everything else. A Diapered face is an NPC face. The  acronym is a video-game reference. A Non Playable Character. That is, something without any free will, a construct that acts according to its programming.