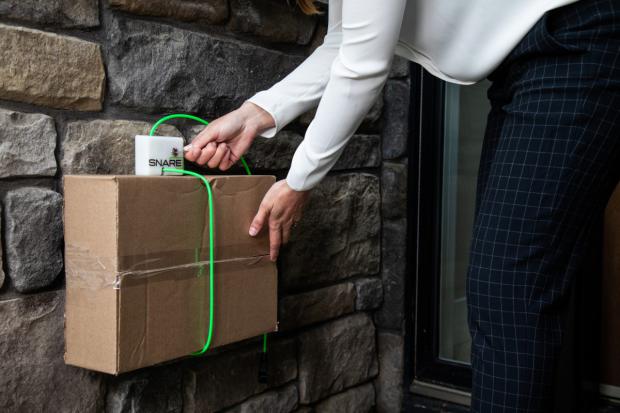 Invented by Canadian entrepreneur (and former machinist) Dennis Evans, Snare incorporates two parts – a stainless steel bracket that's permanently mounted on an outdoor surface such as a wall, and the main parcel-securing unit. The latter is key-locked onto the mount when the user is expecting a package.

Following delivery instructions that the user provided when they ordered the item, the courier just places the package within the unit's hanging loop of rubber-coated 7-strand stainless steel aircraft cable, then pulls that cable through the unit's body. Doing so cinches it tight around the package. That cable subsequently can't be loosened until the user unlocks the unit from the wall mount.

And yes, given a hefty enough set of bolt cutters, thieves could cut through the cable. They could also just cut the package itself open while it's still locked up, then pull out its contents. Again, though, the idea is to make it impossible for them to simply run up onto the porch, grab the package, and leave.

We have in fact seen more secure systems, although they've typically required couriers to be professionally trained in their use.

Should you be interested, the Snare Parcel Protection system is currently the subject of a Kickstarter campaign. A pledge of CAD$69 (about US$51) will get you a setup, when and if they reach production. The planned retail price is US$75.