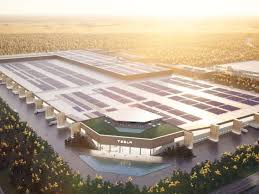 Tesla is able to complete new gigafactories in less than 11 months. Tesla can raise tens of billions of dollars from the markets, leverage over $8 billion in cash and is rapidly growing profitability to increase the pace of gigafactory construction. 2021 profits will be enough to fund 2-3 new factories each year.

In Berlin, Tesla went from first pillars to first walls in two weeks while this step took 4 weeks in Shanghai.

In Shanghai, Tesla went from first walls to first car bodies in 5 months and to first delivered cars in 8.5 months.

You can see in the pictures that the construction teams have modular wall sections ready to be lifted in place between pillars. The main outer shell of Giga Berlin could be done by the end of September. The first cars could be delivered by the end of December, 2020.

In the second quarter 2020 earnings call there was mention of another new US factory besides the Texas factory. Tesla plans to complete three factories (Berlin, Texas and one other factory) within 12-18 months.