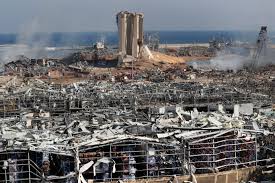 Thus far an official ongoing investigation by Lebanese authorities into the cause of Tuesday's Beirut port blast, now considered the largest non-military munitions explosion in history, has dubbed it severe "negligence".

It's now well known that over 2,500 tons of ammonium nitrate, an ultra-combustible chemical compound utilized in fertilizers and production of explosives, was allowed to sit at the port in a warehouse going back seven years.

Specifically, President Michel Aoun identified that it was no less than 2,750 metric tons of ammonium nitrate that detonated as it was "stored unsafely" — though port officials reportedly attempted to warn the government for years that it must be moved. A number of port officials have been placed under house arrest pending the investigation.

Customs chief Badri Daher has told international media that his agency pleaded with Lebanese courts and high officials to order the chemical removed. Daher says the request for urgent removal was made six times to the judiciary over the years, all denied.

"This did not happen," he said. The end result after the dangerous chemical — which is the same use in the deadly 1995 Oklahoma City bombing — was stored there since 2013 (also in undiluted form), was the most destructive blast in Lebanese history, killing over 135 people and injuring more than 5,000 - not to mention an estimated three billion dollars in damage.