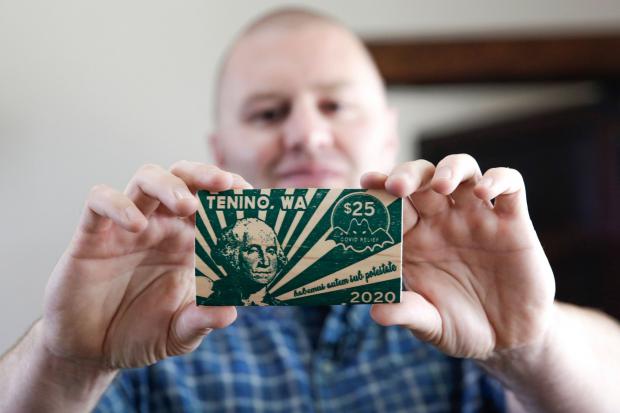 In a back room of the Tenino Depot Museum, a modest sandstone building in a city of less than 2,000 in Washington State, there is a rickety old machine that officials believe could help save the community from looming economic collapse: With it, money is literally being made from trees.

Printed on postcard-sized sheets of planed maple veneer by Tenino's only resident expert using an antique 1890 Chandler & Price letterpress, these "wooden dollars" are being handed out to locals suffering financial hardship. Pegged at the rate of real U.S. dollars, the currency can be spent everywhere from grocery stores to gas stations and child care centers, whose owners can later exchange them.

"We want this to be a symbol of hope," says Tenino's mayor, Wayne Fournier, of the City Hall-funded program. "We preach localism and investing in our local community, and the idea with this scheme is that we'll stand together as a community and provide relief to individuals that need it while fueling consumption. It's in our city's DNA."

Indeed, the wooden currency is a reboot of a Tenino program that dates back to the darkest days of the Great Depression. The logging city's only bank at the time had closed, and local businessmen decided to establish a wood-based scrip to allow commerce to continue. Tenino's 1931 program was the first of its kind in the the U.S.