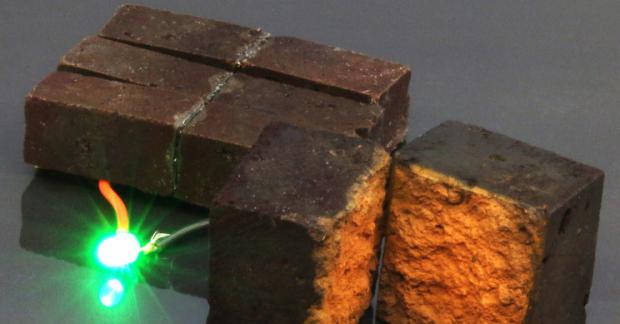 Red bricks, one of the world's most abundant and cheapest building materials, can be converted into batteries that can be charged to hold electricity, according to new research from Washington University in St. Louis.

If their "smart brick" concept is truly scalable, we might have whole new meanings for the concept of a self-sustainable home and a bricked battery.

The researchers behind the concept published their proof-of-concept on August 11 in Nature Communications, in which they showed a brick directly powering a green LED light (picture above).

"Our method works with regular brick or recycled bricks, and we can make our own bricks as well," Julio D'Arcy, assistant professor of chemistry explained in a press release.
This Ghostly 'Blue Whirl' Spinning Light Is Made of Three Distinct Flames

"As a matter of fact, the work that we have published in Nature Communications stems from bricks that we bought at Home Depot right here in Brentwood (Missouri); each brick was 65 cents," he continued.

Essentially, D'Arcy and colleagues, including Washington University graduate student Hongmin Wang, first author of the new study, detailed how to convert red bricks into a supercapacitor.

"In this work, we have developed a coating of the conducting polymer PEDOT, which is comprised of nanofibers that penetrate the inner porous network of a brick; a polymer coating remains trapped in a brick and serves as an ion sponge that stores and conducts electricity," D'Arcy said.

The iron oxide and rust in red bricks that give them their color are essential for triggering the polymerization reaction. The researchers say that walls made from these bricks have a potential for storing a large amount of energy.

"PEDOT-coated bricks are ideal building blocks that can provide power to emergency lighting," D'Arcy said. "We envision that this could be a reality when you connect our bricks with solar cells—this could take 50 bricks in close proximity to the load. These 50 bricks would enable powering emergency lighting for five hours.

"Advantageously, a brick wall serving as a supercapacitor can be recharged hundreds of thousands of times within an hour. If you connect a couple of bricks, microelectronics sensors would be easily powered."

The Speed Of Light May Soon Be Possible Through A New Thruster, Claims A NASA Funded

Battery Boom for Electric Cars, Trucks and Half the Grid by 2040