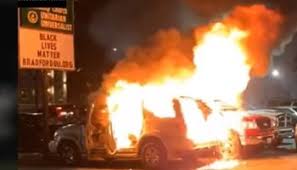 By now, conservatives across the US understand that most of the violence being caused in the aftermath of these police shootings isn't organized by locals, but rather by bands of traveling activists who live in nearby metropolises. In the Midwest, that's Chicago, a hub of racial activism since Bernie Sanders went to school there back in the 1960s. Some might be coming from Milwaukee as well.

Just like we saw in New York City, many of the looters and people there committing acts of vandalism and violence are drawn from Chicago and other nearby areas.

On Tuesday's broadcast of the Fox News Channel's "The Story," Rep. Bryan Steil (R-WI) stated that local law enforcement in Kenosha, WI are "very concerned large numbers of people are coming up from Chicago and trying to disrupt the public safety in the community of Kenosha," in the wake of the shooting of Jacob Blake.

Meanwhile, left-wing pundits are already trying to frame the shooting as an act of white supremacist violence even though both the shooter and his victims were armed, and white.