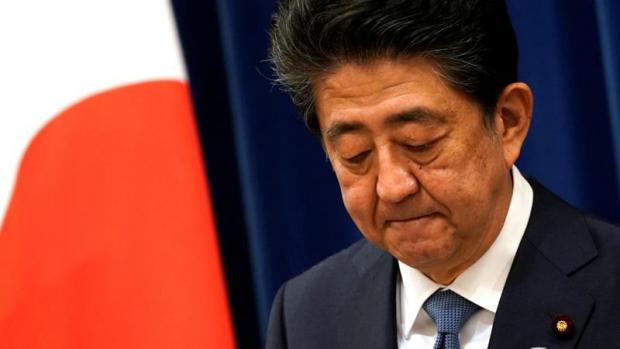 For the second and final time in his political career, Japan's Shinzo Abe said he was resigning the post of prime minister and
head of the ruling Liberal Democratic Party (LDP) due to ulceritive colitis (i.e., severe diarrhea) ending a tenure as the country's longest-serving prime minister in which he sought to revive an economy stricken by deflation and push for a stronger military.

The news was first reported by national broadcaster NHK at 14:08 JST, and prompted a violent rally in the Japanese Yen.

The PM's health issues, arguably precipitated by the recent collapse in his approval ratings had led to growing speculation that Abe may step down well before the end of his current term as LDP President (which runs through September 2021), but the suddenness of the resignation came as a significant surprise to markets, and has prompted many to ask: what happens to Abenomics without Abe, and does the head of Japan's government even matter as long as Kuroda is there to hit CTRL-P in perpetuity?

The emerging consensus on Wall Street is that no matter who is chosen as Abe's successor, the likelihood of a reversal in the current "Abenomics" macro policy mix is very low.

As BofA's Izumi Devalier writes, on monetary policy, a continuation of the status quo under Governor Kuroda. On fiscal, the need to shore up the economy and markets during the leadership transition and ahead of lower house elections (due by October 2021), implies modest upside risks to additional stimulus that is likely to be announced before year-end. Meanwhile, the "white swan scenario" of a consumption tax cut remains low.