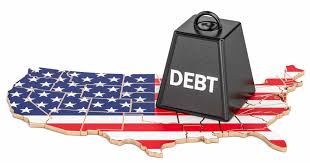 This week, the Congressional Budget Office said that "the federal budget deficit is projected to hit $3.3 trillion."

Why is that significant?

Well, for one thing before the coronavirus crisis, the federal deficit for this fiscal year was going to be "only" $1 trillion. Now it's projected to be $3.3 trillion.

That means that the federal government is spending 3.3 trillion more than what it is bringing in with taxes.

How does it spend more than it has? By going further into debt.