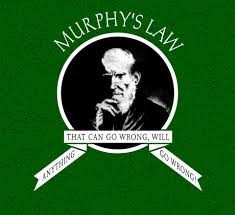 The reason it has proliferated and penetrated to every corner of our modern society is the embedded truth sprinkled with just a kiss of post-modern ironic fatalism.

As a result, it doesn't quite mean what the original version did. I think you, as I, will prefer the first one.

That Murphy was Air Force Captain Edward A. Murphy, Jr. Around the time Chuck Yeager was out at Edwards Air Force Base in California breaking the sound barrier, in 1947, another less well-known figure, John Paul Stapp, was in the same place at the same time trying not to kill himself by testing the limits of the forces that would otherwise kill him.

In addition to being military, Captain Stapp was also a medical doctor. He was often rumored to be the physician who signed off on Yeager's famously broken ribs so that the latter pilot would be able to make history the very next day by becoming the first human to ever break the sound barrier. That didn't actually happen but the truth, as is often the case, was more interesting as filmmaker (and author of "A History of Murphy's Law") Nick Spark discovered. Yeager related to Spark that it was actually a vet in Rosamund, California who fixed up his ribs, not Stapp.

But Stapp did make significant contributions to history. More important than any footnote to Yeager's accomplishments was his other incredibly dangerous work, where the good doctor would repeatedly and voluntarily strap himself into a rocket-powered sled in order to examine the potentially catastrophic effects of massive physical forces on the human body.