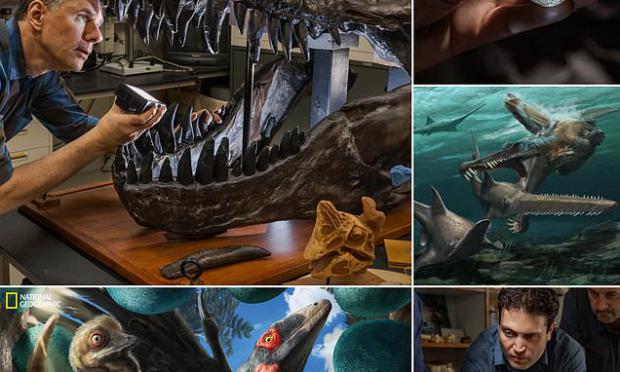 Paleontologists in the field are typically seen as experts  hunched over the ground, brushing dirt off dinosaur bones in a dry, barren landscape.

However, researchers are now using techniques from medicine, chemistry, engineering and physics to expose the secrets of these prehistoric creatures in labs across the world.

National Geographic released its October issue with a cover story on 'Reimaging Dinosaurs,' where it discuss new technologies in the field to uncover the look and lives of the animals, along with groundbreaking discovers made  with these techniques over the past few years.

Researchers are using CT scanners in fossil reconstruction, particle accelerators for probing specimens and lasers to see what type of chemicals samples contain.

Paleontologists have identified nearly 50 new dinosaur species each year, determined deinonychus laid blueish eggs, learned the spinosaurus was more aquatic and found a tyrannosaurs rex used its large nostrils to release heat - discoveries that may may otherwise have been lost.

Michael Greshko, author of National Geographic magazine's October issue cover story, told DailyMail.com: 'We are living through a golden age of paleontology as a whole, but as for dinosaurs specifically.'

'For a group of animals that died out 66 million years ago, there are more than 10,000 species living today.'

'We live along dinosaurs every single – we call them birds.'

'You could argue in sense the age of dinosaurs never really ended.'