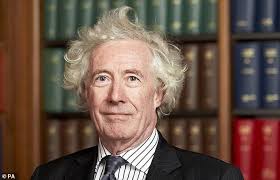 This is the verdict of one of the most distinguished lawyers in the country, the retired Supreme Court Judge Lord Sumption.

He said last week in a podcast interview: 'I don't myself believe that the Act confers on the Government the powers that it has purported to exercise.'

Lord Sumption's intervention is, of course, so huge and important that the media of this country have somehow not noticed it. So, as has been the case from the start, you have to get it from me.

He was referring to the Public Health Act of 1984, the basis for almost all the sheaves of increasingly hysterical decrees against normal life which the Health Secretary Matt Hancock has issued since March. I promise you that it is not usual for a retired senior judge to use such language in public.

This 1984 Act was drawn up mainly to give local magistrates the power to quarantine the sick.

Nothing in it remotely justifies these astonishing moves – house arrest, travel restrictions, harsh limits on visiting family members, interference with funerals and weddings, closure of churches, compulsory muzzles, bans on assembly and protest.