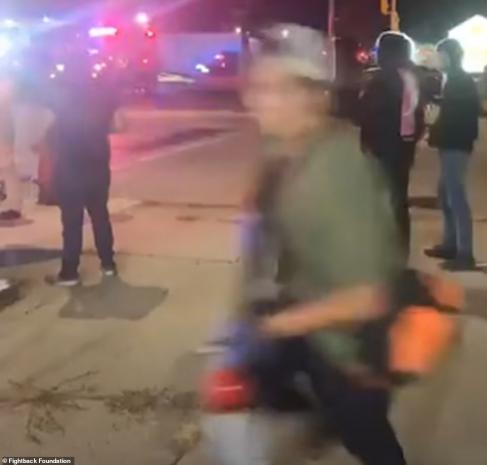 Attorneys for Kyle Rittenhouse have released new footage of the shootings he carried out during protests and riots in Kenosha, Wisconsin, arguing that they demonstrate a clear-cut case of self-defense.

Rittenhouse, 17, is charged with intentional homicide and other charges for fatally shooting two and injuring one during a confrontation on August 25, the third night of protests over the police shooting of Jacob Blake, a black man who was shot in the back and paralyzed.

On Tuesday, Rittenhouse's attorney Lin Wood released footage outlining the defense's version of events on the night of the shootings, in particular highlighting the events leading up to the first shooting, which was not captured on widely-circulated video of the subsequent two shootings.

In a slickly produced 11-minute video released by Wood's FightBack Foundation, the defense team argues that other shots were fired before and after the first fatal shooting, which killed 36-year-old Joseph Rosenbaum.

Rittenhouse, a high school student and lifeguard in nearby Antioch, Illinois, has said that he and his friends were called upon by a business owner in Kenosha to help maintain the peace after several businesses were burned by protesters in preceding nights.