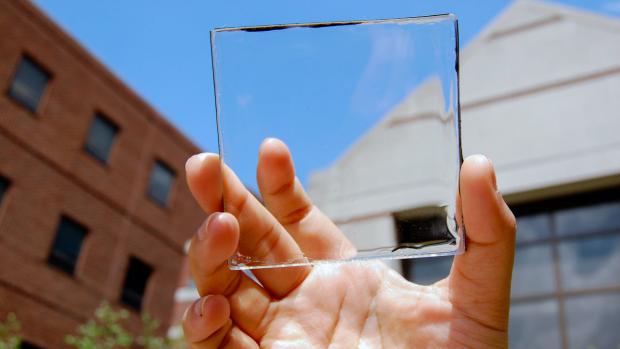 A team from the University of Michigan contributed massively to this research, which was supported by the U.S. Dep. of Energy, by recently breaking the established scientific record for conversion efficiency (8.1%) and transparency (43%) in their carbon-based solar cells inserted into window glass, turning it to a slightly greyish-green tint like sunglasses or car windows.

"The new material we developed, and the structure of the device we built, had to balance multiple trade-offs to provide good sunlight absorption, high voltage, high current, low resistance and color-neutral transparency all at the same time," said Yongxi Li, an assistant research scientist in electrical engineering and computer science who participated in the record breaking.

In addition, the researchers developed optical coatings which when applied to the glass, as is often the case with treated windows on skyscrapers, boost both power generated from infrared light and transparency in the human-visible range—two qualities that are usually in competition with one another.

Both versions of their cells can be manufactured at large scale, using materials that are less toxic than other transparent solar cells, and they can be placed in between the panes of double-glazed windows.

The transparent organic solar cells can also be customized for local latitudes, taking advantage of the fact that they are most efficient when the sun's rays are hitting them at a perpendicular angle.

While they haven't yet brought any of their remarkable technology to market, another company looking to turn skyscraper windows into electricity-rich solar panels is already making profits.