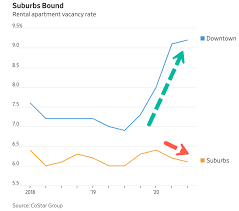 There's a new twist to the rental market: Apartment rents in suburban markets rise across the U.S., while city rents are slumping, mostly because city dwellers are fleeing imploding liberal-run metro areas.

By now, readers have grasped several of the factors pushing city dwellers out to rural communities, that is, the virus pandemic and resulting lockdowns, socio-economic implosions, and, of course, remote working.

A revival of the suburbs is the most significant 2020 real estate trend that will likely persist for a couple of years. Apartments in rural America offer more room, peace of mind, less crime, and lower probabilities of contracting the virus than ones stacked on top of each other in densely populated cities.

As early as March 25, we noted how city folks in Southern California packed up their bags and stayed in rural desert Airbnb properties to escape the pandemic. The trend has certainly evolved since then, with many top metro areas, including New York City and San Francisco, seeing large outflows of folks.

WSJ cited a new report from data firm CoStar Group Inc. as saying apartment rents in suburban markets of Sacramento, California; Norfolk, Virginia; and the Inland Empire of Southern California increased 3.2% to 4.6% at the end of the third quarter compared with March.

How the Housing Bubble Was Reblown in 20 Cities