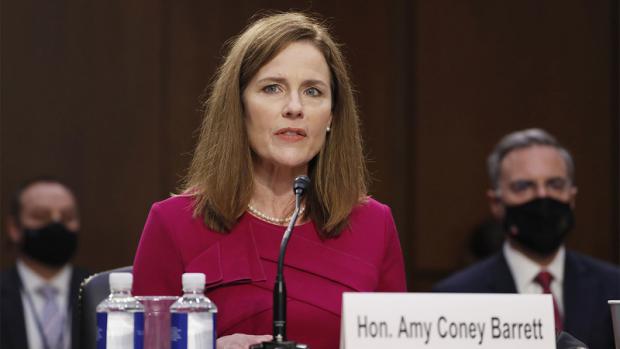 Amy Coney Barrett, a circuit judge on the U.S. Court of Appeals for the Seventh Circuit in Chicago, became the 103rd associate justice of the U.S. Supreme Court on October 27, 2020, after she was administered the oath of office by Justice Clarence Thomas and the judicial oath by Chief Justice John Roberts.

After the death of Justice Ruth Bader Ginsburg on September 18, Donald Trump nominated Barrett to succeed her a week later. Her confirmation hearing, which lasted four days, began on October 12. On October 22, the Senate Judiciary Committee reported her confirmation favorably by a 12-0 vote of all Republicans. The ten Democrats on the committee all boycotted the meeting even though the American Bar Association rated Barrett "well qualified" — its highest rating. On October 25, the Senate voted 52-48 to confirm her nomination, with all of the Senate Democrats and one Republican voting against her.

Barrett was criticized during her confirmation hearing because, when questioned by Sen. Dianne Feinstein (D-Calif.), she would not say whether she agrees with "a right-wing scholar who has argued that Medicare and Social Security are unconstitutional because they exceed the spending powers of Congress." "I'm not familiar with that article," Barrett said, referring to a 2015 essay by University of San Diego School of Law professor Mike Rappaport, "so I don't know what reasoning he advances." When pressed further about whether Medicare is unconstitutional, Barrett said she "can't answer that question in the abstract…. I also don't know what the arguments would be…. But it's not a question I've ever considered before." "It's hard for me to believe that that's a real question," Feinstein responded, "because I think the Medicare program is really sacrosanct in this country."

1 Comments in Response to Of Course They Are Unconstitutional

Nobody is required to use anything that Government offers. If people didn't, the offer would at least be shelved. But it might disappear altogether. So, it's the people through free agreement who use the offers that Government makes to them.