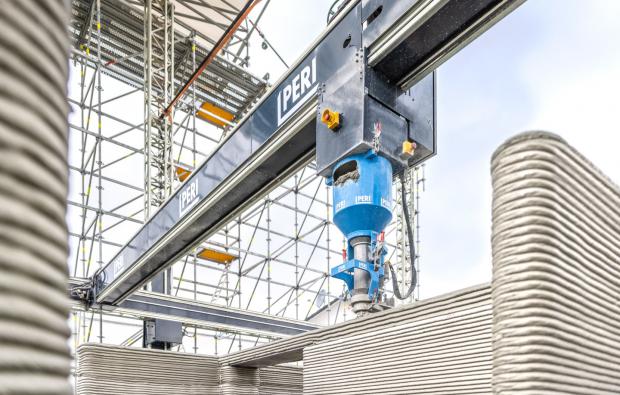 Following news of an entire 3D-printed community and a 3D-printed two-story home, a three-story apartment building is now being built in Germany using what's described as the fastest 3D construction printer on the market.

The project is led by German formwork and scaffolding firm Peri for the Michael Rupp Bauunternehmung construction company. Once complete, it will measure roughly 380 sq m (4,090 sq ft), spread over three floors, plus a basement level, and consist of five apartments, four of which will be rented out, with one used as a show home.

The apartment building will be printed on-site using COBOD's BOD 2 printer. The BOD 2 is modular and for this project measures 12.5 x 15 x 7.5 m (41 x 49 x 24 ft). It prints at a maximum speed of 100 cm (39 in) per second, which is equivalent to printing 10 tons of concrete per hour, making it "currently the fastest 3D construction printer available on the market," according to Peri.

The construction process itself is similar to most other 3D-printed architecture projects we've covered and involves the printer extruding a cement mixture out of a nozzle in layers, gradually building each wall. It requires two human operators and other human construction work is also going on while the printer is in use too.