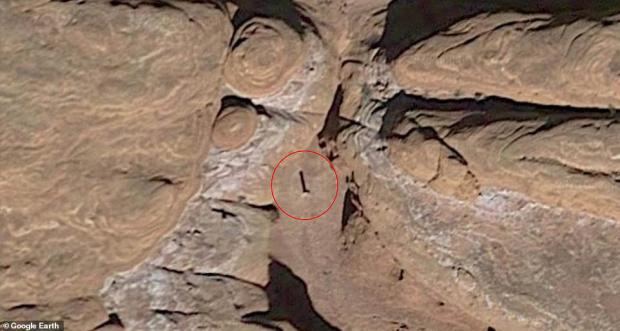 A mysterious metal monolith found in the remote Utah desert has captured the attention of UFO spotters, conspiracy theorists and Stanley Kubrick fans around the world, as it's revealed the structure has been standing since at least 2015 or 2016.

The shiny, triangular pillar - which protrudes approximately 12 feet from the red rocks of southern Utah - was spotted last Wednesday by baffled local officials counting bighorn sheep from the air.

After landing their helicopter to investigate, Utah Department of Public Safety crew members found 'a metal monolith installed in the ground' but 'no obvious indication of who might have put the monolith there.'

'It is illegal to install structures or art without authorization on federally managed public lands, no matter what planet you're from,' warned the agency in a tongue-in-cheek press release Monday.

News of the discovery quickly went viral online, with many noting the object's similarity to the strange alien monoliths that trigger huge leaps in human progress in Kubrick's classic sci-fi film '2001: A Space Odyssey.'

Officials refused to disclose the object's location out of fear that curious sightseers would flock to the remote wilderness, but internet sleuths managed to pinpoint its position within hours nonetheless.

A Reddit user said they had managed to geo-locate the obelisk using surrounding rock formations.

Sharing the Google Earth location - where a small structure can be seen, roughly six miles from the nearest road - the user said the structure was first photographed by Google in 2016.

Some satellite images of the monolith date back to a year earlier in 2015.

Lieutenant Nick Street, a spokesman for the Department of Public Safety, said it's possible the structure has been there for '40, 50 years, maybe more.'