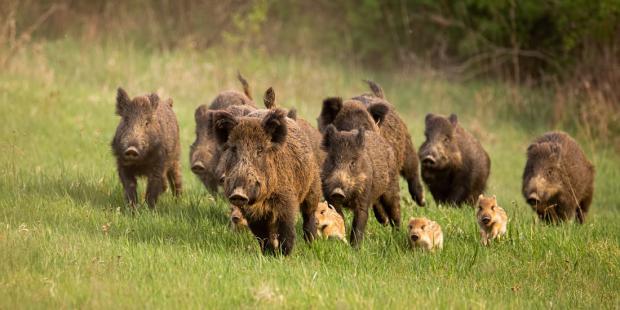 How this meat reaches the table is a story that is quintessentially Texan, involving rugged individuals, a love of the outdoors and, yes, guns. To tell that story, let's go back to earlier this year, before the coronavirus, to a wheat field in north-central Texas at dusk.

Peering through an infrared night-vision scope atop his customized AR 15-style rifle, Fred Jones spied his prey trotting into the field by the dozens.

"We may not get the big one," Jones said, "but we're going to kill some pigs."

It's open season year-round on feral pigs, whose population in Texas has grown to nearly 3 million. Hunters are not required to retrieve carcasses, although there's an incentive to do so: "wild boar" sells for up to 60 cents a pound.

The hogs are considered an invasive species, much larger than their south Texas cousin the peccary, or javelina. And they're armed with four tusks that can be several inches long and razor sharp.