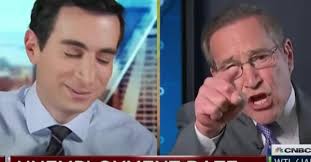 It all started with a pre-jobs report discussion of the worsening employment picture for America's retail workers, before things quickly took a turn for the dramatic.

"Why are those people any less safe in a restaurant with plexiglass...I think it's really sad, when we look at the services sector...that particular dynamic should be studied more," Santelli posited.

"You can't tell me that shutting down...which is certainly the easiest answer...is the only answer".

A clearly galled Sorkin then launched into a patronizing diatribe about the differences between big box retailers, restaurants and churches, and why Santelli was doing viewers a "disservice" by disregarding the science"

"The difference between a big box retailer, and a restaurant - or frankly, a church - are so different it's unbelievable," Sorkin insisted.

Wednesday, January 27, 2021 Cannabis extracts may reduce the risk of dying from Covid-19