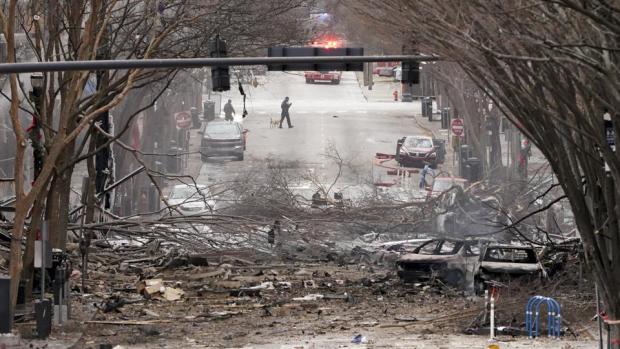 Police have found tissue that could potentially be human remains near the bomb-rigged RV that exploded outside of an AT&T building in Nashville at 6am on Friday morning.

Nashville police chief John Drake gave no further details on the discovery during a press briefing on Friday evening, repeating that there were still no known casulties but that the tissue is being examined.

Law enforcement officers had earlier said remains were found near the bomb site but did not indicate whether they were directly linked to the explosion, whether they could belong to the person responsible or a potential victim.

The bomb was inside an RV that exploded on Second Avenue, between Church and Commerce Street, at 6.40am.

Police were already on the scene and evacuating people after being called to the area forty minutes earlier amid reports of shots fired. When they got there, there were no obvious signs of a shooting but the RV was playing an announcement featuring a woman's voice saying it would explode in 15 minutes.

They rushed to get people out of their homes while the ominous, pre-recorded message played over and over again with music playing inbetween each countdown.

The FBI is investigating but so far no suspect or motive has been identified. Police do not even know if someone was inside the RV when it blew up because the blast was so intense that it was completely obliterated along with everything inside of it.

The blast caused widespread internet and cell phone outages with issues being reports across Kentucky and Tennesse at around noon local time.