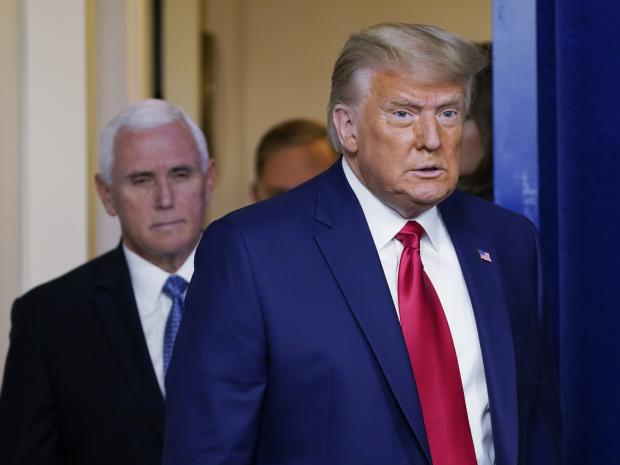 He is always on message. He has hardly ever, as vice president, strayed from the MAGA line.

When asked about his prayers during the pandemic, Pence explained in one breath how he offers prayers of intercession (that the suffering would be comforted), prayers of petition (that leaders would be given wisdom), and prayers of thanksgiving (that Donald Trump is his boss). "I have to tell you," he told RealClearPolitics aboard Air Force Two shortly after accepting the nomination for vice president in August, "I really could not be more proud of this president's leadership through this global pandemic." That Pence would turn a question about faith into an answer about Trump is not surprising.

He has been nothing but dedicated to the president, and no controversy -- not the Ukraine scandal, not the St. John's church photo op, not even the "Access Hollywood" tape -- has ever caused Pence to abandon his post. Disciplined. On message. Loyal. Pence is all of that: A vice president straight out of central casting, who has backed up Trump at all costs but who will now risk four years of earned goodwill in one afternoon. He has to count votes.

As vice president, Pence serves also as president of the Senate, meaning that on Wednesday he will preside over a pro forma certification of the Electoral College vote. The duty is normally procedural. But by clinging to power and alleging widespread voter fraud, Donald Trump has foisted an uncomfortable decision on his loyal lieutenant: ratify the victory of President-elect Joe Biden or back his boss.