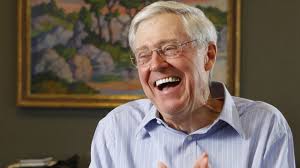 In a statement to Politico, Emily Seidel, CEO of Americans for Prosperity, the main Koch super PAC, said, "Lawmakers' actions leading up to and during last week's insurrection will weigh heavy in our evaluation of future support. And we will continue to look for ways to support those policymakers who reject the politics of division and work together to move our country forward."

While the statement is a bit more ambiguous than the headline, there is clearly no support by the Koch network for any views expressed outside of establishment parameters.

Whatever one thinks of Trump, it is a true sign of weakness to line up with the distortions currently being promoted by the Democrats and lefty media.

Charles, of all people, has to know how the Left operates and how they will use any opportunity to advance their cause.

Hell, I have Murray Rothbard's unpublished paper delivered at a Charles Koch sponsored strategy event where Rothbard explained the entire damn thing. Indeed, in the paper, he even quotes Charles on shock tactics: