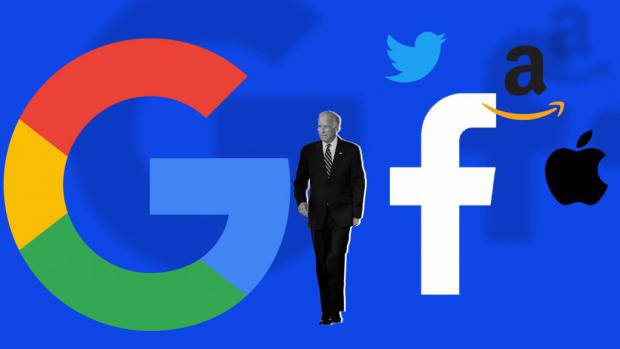 Nice Racket if you can get it.

The Democrats wet dream is to tar and feather opponents and then ban them from even speaking, and the conglomerate multinational octopuses are happy to oblige by tweaking search results, and suspending the right accounts. In return, they get sweet government deals and Section 230 protection.  Who knew Amazon has nearly 500 federal subcontracts? When Amazon employees donate to the Democrats they're just protecting their jobs.

When Google invests another $2 billion in Renewables, the last thing they want is climate denier Commander in Chief.

Democrats love public-private partnerships and they outsourced political repression to the private sector.

That same old document written by old white dead men, not to mention centuries of jurisprudence and tradition, prevents the government from kicking down your door in the middle of the night for wrongthink. But nothing keeps corporations from firing you for wrongthink, for being related to someone who committed wrongthink, or for insufficient political correctness.

The public-private partnership between big government and big monopolies is based on Democrats and corporations doing the dirty work of repressing each other's opponents.

Corporations can't write regulations that suppress competition from upstart rivals, and so the government steps in and keeps the marketplace under the control of a few cartels. And the government can't censor, deplatform, fire, bankrupt, and bar its political opponents from speaking, flying, and doing business. But the monopolies it's been partnering with can and do.