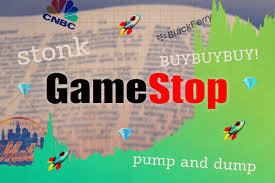 The populist version of the story goes like this: a few thousand angry gamers, colluding via the now infamous WallStreetBets subreddit, brought at least one powerful hedge fund to its knees. Melvin Capital and other short sellers, completely blindsided, lost a reported $5 billion in what must have seemed like a sure-bet opportunity for their model of vulture capitalism.

Meanwhile GameStop, the plucky brick-and-mortar retailer thought to be going the way of Blockbuster Video, gained a reprieve from its looming execution date. Robinhood, the "free" app masquerading as a stock trading platform for the little guy, was exposed as a data-mining operation—one happy to shut down the casino when too many of the wrong kind of people started winning.

And for once, at least a few ordinary retail investors were able to pump a stock and make a killing. Turnabout is fair play!

But things are never so cut and dried. GameStop's position was not quite as precarious as advertised; its financials are reasonably solid and the management team recently gained former Amazon executives, who presumably would not jump onto a sinking ship.

Coinbase Is Crashing... And Dragging The Market With it