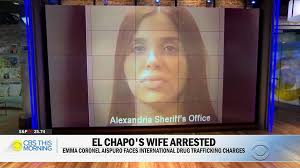 Their latest target is Emma Colonel Aispuro, the wife of the famous Mexican drug lord El Chapo, who the feds convicted and incarcerated for life for drug-war violations. Although Coronel attended her husband's trial in 2019 in Brooklyn, the feds, for some unexplained reason, waited until 2021 to bust her while she was at Dulles Airport.

One possibility, of course, is that they plan to squeeze her into squealing on other Mexican drug lords who they can import from Mexico and put into American prisons. Regardless, it really doesn't matter whether they target her or people they get her to snitch on. The drug war will just continue on with more drug busts and incarcerations.

In other words, no matter who they bust or how many people they bust, things will remain the same. They always have. There is no end to this federal government program. It's a money maker for federal judges, federal prosecutors, federal agents, federal clerks, and the entire federal drug-war bureaucracy.