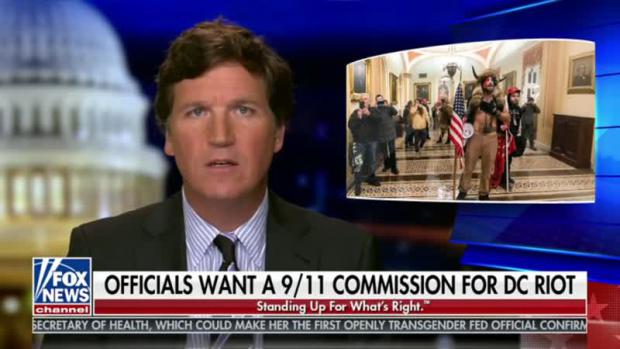 Tucker Carlson has gone after Republican Members of Congress who are supporting a 9/11-style commission into the January 6 attack on the US Capital.

Speaking on his Fox News show Tuesday night, Carlson said the commission would become a partisan witch hunt and 'give power to Nancy Pelosi'.

'It's a complete farce. It's partisan as hell... Don't play along with the fraud,' he said.

'We don't need a 9-11 style commission to see it and they could tell us who shot Ashli Babbitt, the only person killed that day.'

Carlson called out John Katko, the New York Republican appointed to negotiate the terms of the commission with Democrats.

'Republican voters deserve to know the name of every congressional Republican that votes for this farce,' said Carlson.

'They should know which representative is playing along with this poisonous hoax.'

Earlier on Tuesday, House Republican Minority Leader Kevin McCarthy and Whip Steve Scalise encouraged members of the party to vote against the creation of a commission to investigate the January 6 MAGA riot.