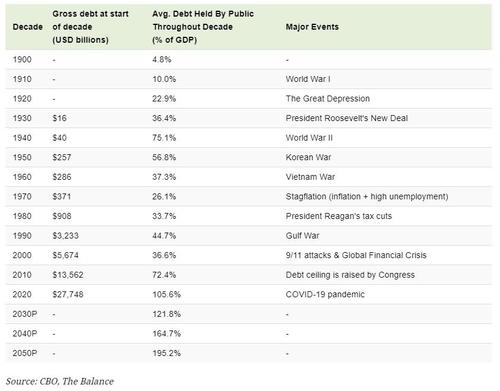 To see how America's debt has gotten to its current point, Visual Capitalist's Marcus Lu and Christina Kostandi created an interactive timeline using data from the Congressional Budget Office (CBO). It's crucial to note that the data set uses U.S. national debt held by the public, which excludes intergovernmental holdings.

*Editor's note: This top level figure includes intragovernmental holdings, or the roughly $6 trillion of debt owed within the government to itself.

It's worth pointing out that the national debt hasn't always been this large.

Looking back 150 years, we can see that its size relative to GDP has fluctuated greatly, hitting multiple peaks and troughs. These movements generally correspond with events such as wars and recessions.