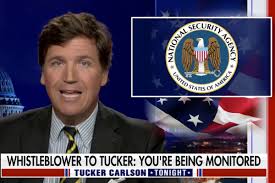 Carlson told viewers a whistleblower from the U.S. government reached out to his show "to warn us that the NSA, the National Security Agency, is monitoring our electronic communications and is planning to leak them in an attempt to take this show off the air."

"Now, that's a shocking claim, and ordinarily we'd be skeptical of it," he continued.

Carlson told viewers that the evidence they have of this is that "the whistleblower, who is in a position to know, repeated back to us information about a story that we are working on that could have only come directly from my texts and emails, there's no other possible source for that information, period."

He continued on to say "spying on opposition journalists is incompatible with democracy" and that "they are definitely doing it to us."

"This is scary and we need to stop it right away," Carlson added.

Tucker is making serious accusations with no proof and is basing corroboration on a story he allegedly is working on that none of us know about.

Maybe his comms were picked up. We know DOJ collected comms of journos during Obama and Trump presidencies. pic.twitter.com/JQCYuURNpt