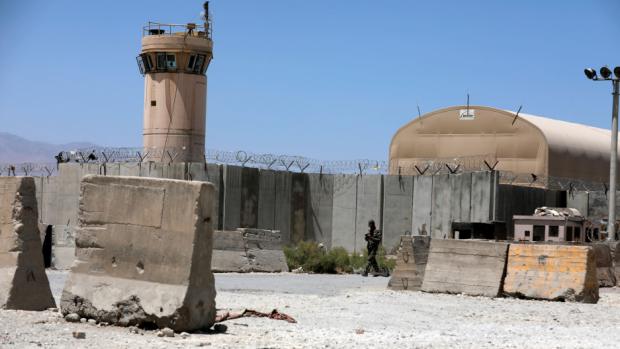 Afghan locals started hawking basketballs, stereo speakers, laptop computers, bicycles and helmets, desk fans, guitars, and anything else they could get their hands on after looters ransacked a now-former American military base that was vacated by departing US soldiers in the dead of night Friday.

The US left Afghanistan's Bagram Air Base after nearly 20 years by shutting off the electricity and slipping away without notifying the base's new Afghan commander, who discovered the Americans' departure more than two hours after they left, Afghan military officials said.

Afghanistan's army showed off the sprawling air base Monday, providing a rare first glimpse of what had been the epicenter of America's war to unseat the Taliban and hunt down the al-Qaida perpetrators of the 9/11 attacks on America.

The US announced Friday it had completely vacated its biggest airfield in the country in advance of a final withdrawal the Pentagon says will be completed by the end of August.

The Americans left behind a fleet of sport utility trucks and mine-resistant vehicles as well as a notorious prison and fortified walls.

'They (Americans) are completely out now and everything is under our control, including watchtowers, air traffic and the hospital,' a senior Afghan government official told Reuters.

Reuters journalists on Monday visited the heavily fortified compound, long a symbol of Western forces deployed to shore up the Afghan government against the Taliban's campaign to regain power after being toppled by a US intervention in 2001.