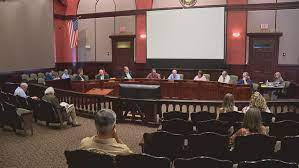 Just to show, again, how wealthy, powerful, and out of control the major social media platforms have gotten, YouTube has now assumed the right to censor — yes, censor — city council meetings if the speech Nazis who work there don't like what's being said.

A North Carolina county board of commissioners is ripping Google-owned YouTube and pushing back hard legally after the platform took it upon itself to delete one of the board's videos, allegedly for violating its "terms of service" as they pertain to medical 'misinformation.'

A Henderson County Board of Commissioners meeting from June 16 was removed by the platform, which led members to call an emergency meeting two days later. At the emergency meeting, commissioners ordered their staffers to find other platforms that can host their meetings without being censored, as well as find alternatives to all Google products. That would include nearly $400,000 earmarked for Google Chromebooks for the county's public schools, The Epoch Times added.