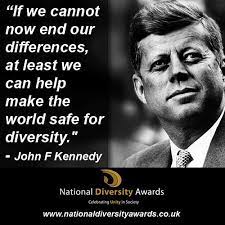 Kennedy's message to Moscow and his fellow Americans:

"If (the United States and the Soviet Union) cannot end now our differences, at least we can make the world safe for diversity."

As George Beebe writes in his essay, "It's a Big World: The Importance of Diversity in American Foreign Policy," in the July National Interest, Kennedy later elaborated:

To Kennedy, a student of history, acceptance of the reality of a world of diverse political systems, many of them unfree, was a precondition of peace on earth and avoidance of a new world war.

Kennedy was asking us to recognize that the world consists not only of democrats but also of autocrats, dictatorships, military regimes, monarchs and politburos, and the goal of U.S. foreign policy was not to convert them into political replicas of the USA.