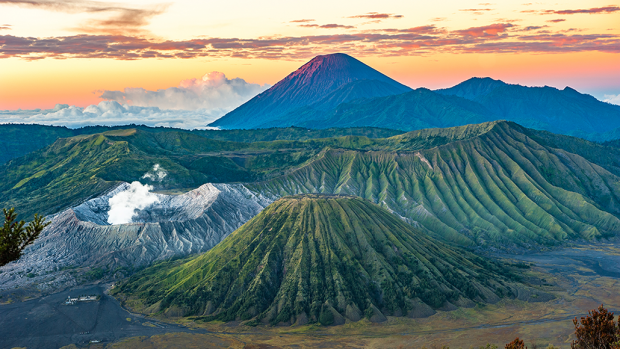 Three remote Alaska volcanoes are erupting simultaneously along a row of remote islands nicknamed the 'Ring of Fire.'

Pavlof, Great Sitkin and Semisopochnoi Volcanoes all remain under an orange threat level Friday, signaling that eruptions are underway and minor ash emissions have been detected. They sit along the remote Aleutian Islands, known as the 'Ring of Fire,' so called because of the number of volcanoes that sit along a deep oceanic belt running under the islands.

So far, none of the small communities near the volcanoes have been affected, Chris Waythomas, a geologist with the Alaska Volcano Observatory, said on Thursday.

Webcams on Thursday clearly showed episodic low-level ash emissions from Pavlof, the volcano raising the most red flags out of the three, prompting the observatory to raise the volcano's threat level from yellow, or exhibiting signs of unrest, to orange.

The change of color signal was prompted by ash clouds, which were seen rising just above Pavlof volcano's 8,261-foot (2,518-meter) summit, drifting about 6 miles (9.7 kilometers) to the south before dissipating, Waythomas said.

He added that Pavlof is a 'very sneaky' volcano due to its 'peak open system volcano', meaning that its 'magmatic plumbing system is open and magmas can move to the surface really fast and it can start erupting almost with no warning.'

The nearest community to the volcano is Cold Bay, about 35 miles (56.33 kilometers) southwest of Pavlov, one of Alaska's most active volcanoes in the Aleutian Islands arc of active and dormant volcanoes.

Pavlov is a snow and ice-covered stratovolcano on the southwestern end of the Alaska Peninsula, nearly 600miles (965.6kilometers) southwest of Anchorage.