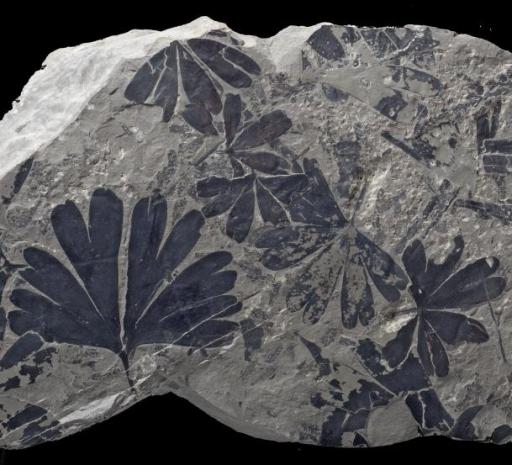 Fossilized ginkgo leaves could help scientists better understand what the Earth's climate was like 100 million years ago, during the age of the dinosaurs.

These leaves, embedded in rocks at the Smithsonian Natural History Museum, are not fragile like some other fossils, but rather sturdy and able to handled with ease.

The rounded upper lobes of the triangular leaf is a dead giveaway that it is an ancient ginkgo leaf, which fell from a prehistoric forest during the time of T-rex and triceratops.

'You can tell this is ginkgo, it´s a unique shape,' Richard Barclay, a paleobotanist at the Smithsonian, said in an interview with the Associated Press. 'It hasn't changed much in many millions of years.'

The fossil record of ginkgo is 'venerable,' according to the University of California, Berkeley, given that it dates back to 190 million years ago.

'Although this genus has undergone much change over this length of time, fossilized leaf material from the Tertiary species is considered similar or even identical to that produced by modern trees,' the university wrote on its website.

The organic matter left behind from the ancient leaves could help not only understand the climate of yesteryear, but the current situation Earth is dealing with, as rising temperatures impact the Earth's climate.