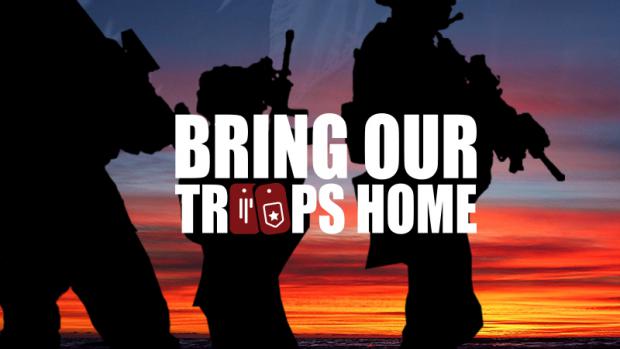 America must be restored to a proper role in the world. But we can do that only through the recovery of confidence in ourselves…. together we will call America home to the ideals that nourished us from the beginning."—George S. McGovern, former Senator and presidential candidate

It's time to bring all our troops home.

It's not enough to pull American troops out of Afghanistan, America's longest, bloodiest and most expensive war to date.

It's time that we stop policing the globe, stop occupying other countries, and stop waging endless wars.

The U.S. military reportedly has more than 1.3 million men and women on active duty, with more than 200,000 of them stationed overseas in nearly every country in the world.

Those numbers are likely significantly higher in keeping with the Pentagon's policy of not fully disclosing where and how many troops are deployed for the sake of "operational security and denying the enemy any advantage." As investigative journalist David Vine explains, "Although few Americans realize it, the United States likely has more bases in foreign lands than any other people, nation, or empire in history."