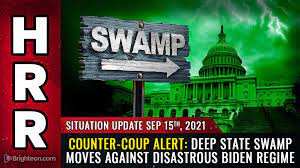 (Natural News) Today's article and podcast focuses on a theory that says the deep state swamp is now turning against the Biden regime (and its traitorous operators like Gen. Milley) after realizing if they don't stop the destruction, they will lose all their power, salaries, benefits and kickbacks as the U.S. empire collapses.

All of a sudden, people deeply embedded in the Pentagon, the CIA, NSA and even the FBI are coming to the realization that the Biden regime really is working for communist China, and the CCP's ultimate goal is the complete destruction of the United States of America (along with the CCP-ordered executions of all the former high-level officials in the US government).

That would destroy the entire power structure of the U.S. deep state and leave all its current players with no clout, no money, no power… nothing. They would, in fact, be among the very first to be targeted and executed by the communist Chinese once China seizes control over the United States via military occupation.

Suddenly, it seems, the swamp is fighting for its own survival, in much the same way that parasitic ticks sucking blood off a dog don't want the dog to die. Even parasites, sooner or later, realize they need the host to keep living or they all perish together.

The recent exposing of Gen. Milley and the obvious public positioning of Biden as an incompetent dementia patient are all part of a process, we now believe, to expose and remove the most cancerous anti-American elements that have infested the Pentagon, White House and Congress. Nancy Pelosi's name is probably on that same list, as she is clearly revealed as complicit in Milley's treasonous plot to overthrow the Trump administration and follow the bidding of communist China.

Author: The Media's Agenda is Not to Mislead People, But to Demoralize Them