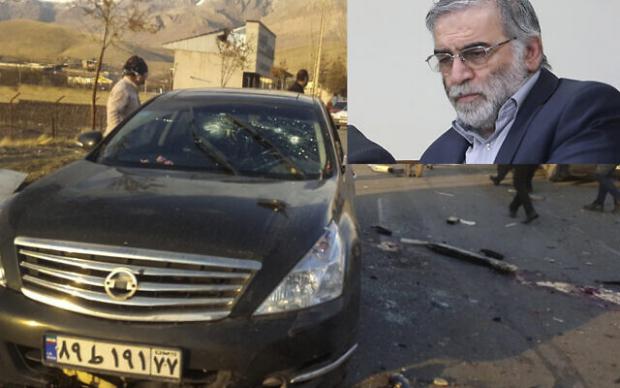 Iran's top nuclear scientist was assassinated by a killer robot machine gun kitted out with artificial intelligence and multiple cameras and capable of firing 600 bullets a minute, according to a new report.

Mohsen Fakhrizadeh, 62, dubbed the 'father' of Iran's illegal atomic program, is said to have been killed in the November 27 ambush by a Mossad sniper who pulled the trigger from an undisclosed location thousands of miles away thanks to the use of satellite.

The gun which fired the fatal shots was positioned in a camera-laden pickup truck lying in wait for his vehicle to come past the ambush point.

It was programmed with AI technology to compensate for a 1.6 second lapse between the intel from the kill site and the sniper's actions, as well as movements caused by the shots being fired and Fakhrizadeh's car driving.

This precision enabled the sniper to hit the desired target and leave Fakhrizadeh's wife, who was in the passenger seat next to him, unscathed.

There was also a second disguised spy car positioned three-quarters of a mile earlier along the route in a spot where Fakhrizadeh's car would make a U-turn to turn down the road toward his country home in Absard, a town east of Tehran.

Cameras fitted in this decoy vehicle positively identified Fakhrizadeh and pinpointed the scientist's location in the car - in the driver's seat with his wife in the passenger seat - sending this information back to the remote sniper.

The entire ambush was over within one minute of the first round being fired.