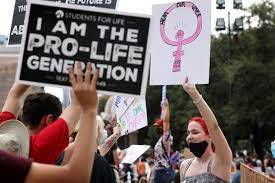 The Texas law, also known as Senate Bill 8, bans abortions after a heartbeat is detected, which is usually around six weeks, unless a medical emergency exists.

U.S. District Judge Robert Pitman, an Obama appointee, had on Wednesday granted the Biden administration's petition to temporarily suspend the law. Pitman at the time also denied Texas' request to delay the enforcement of the injunction until it files an appeal with a higher court.

Texas quickly moved to file an appeal. Texas Attorney General Ken Paxton, a Republican, said in a statement on Thursday, "We disagree with the Court's decision … The sanctity of human life is, and will always be, a top priority for me."

The New Orleans-based Fifth Circuit Appeals Court late on Friday granted the request, setting aside Pitman's order for now. It ordered the Justice Department to respond by Tuesday.

Paxton celebrated the news late Friday. "Great news tonight, The Fifth Circuit has granted an administrative stay on #SB8. I will fight federal overreach at every turn," he said in a statement.

Pro-life group Texas Right to Life praised the development, writing on Twitter, "The Texas Heartbeat Act is back in full effect! … Praise God! The law will continue saving ~100 babies per day!"

The Texas Heartbeat Act was signed into law by Republican Gov. Greg Abbott in May. More than 20 abortion providers sued state officials and district judges in July, alleging the law was unconstitutional, citing the Supreme Court's 1973 decision in Roe v. Wade. The legislation went into effect on Sept. 1 after the Supreme Court didn't respond to an emergency motion asking it to block the ban.