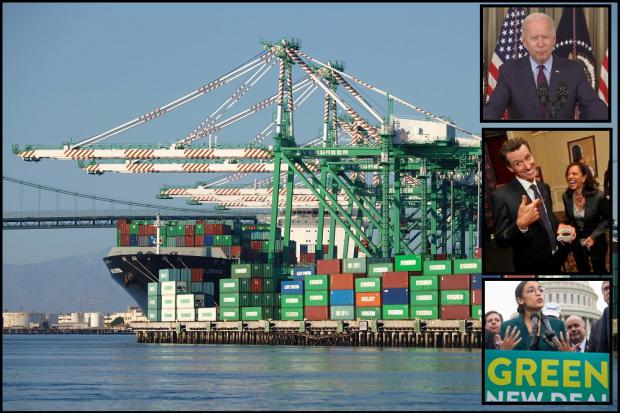 ("The central issue is the inability of emission compliant heavy transportation in California to move those containers full of goods to manufacturing, warehouses  and distribution points.")
VIDEO at Bottom of Page

Hundreds of requests for details on the specifics of the container shipping backlog.  So, I spent 3 days calling sources, digging for details and gathering information on the substantive issue at hand.  The epicenter of the problem is not what is being outlined by financial media, corporate media and politicians who have a specific interest in distracting from the issues at hand.  This has nothing to do with COVID-19.

The issues being discussed today relate to events that happened a long time ago.  As a matter of fact, it was so predictable that Amazon, Walmart, UPS, FedEx, Samsung, The Home Depot and Target all had taken actions years ago -long before COVID- because they knew this day would come.  It was not accidental that those companies showed up at the White House to discuss the issue, because there's now a full court press to hide it.

There is one very specific regional issue driving the problem.  Read on: 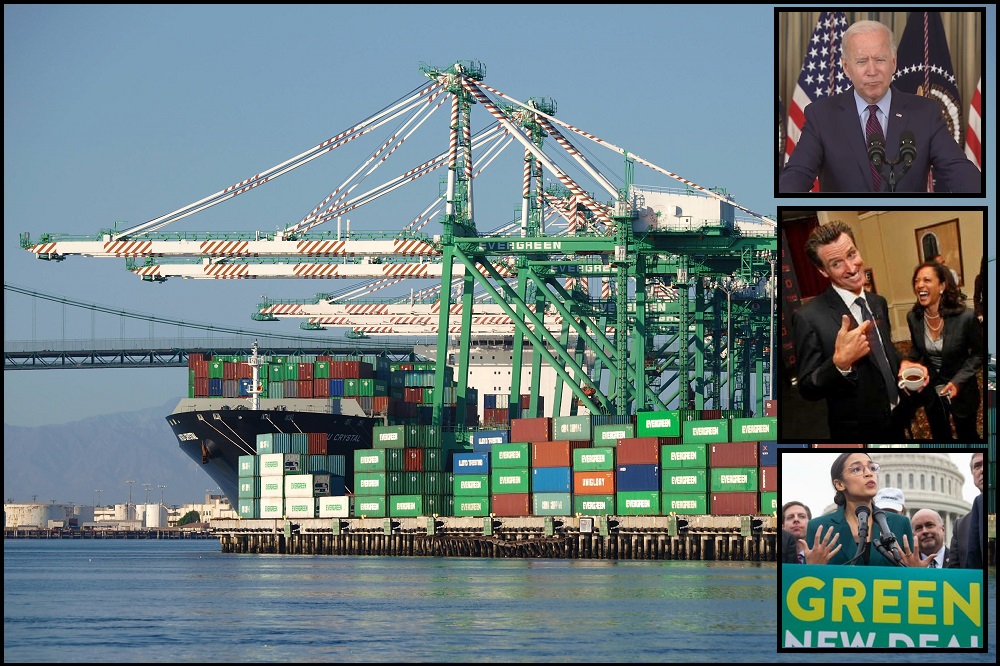 The trucking issue with California LA ports, ie the Port of Los Angeles (POLA) and the Port of Long Beach (POLB), is that all semi tractors have to be current with new California emissions standards.  As a consequence, that mean trucks cannot be older than 3 years if they are to pick up or deliver containers at those ports.  This issue wipes out approximately half of the fleet trucks used to move containers in/out of the port.  Operating the port 24/7 will not cure the issue, because all it does is pile up more containers that sit idle as they await a limited number of trucks to pick them up.  THIS is the central issue.

On October 16, 2020, the EPA reached a settlement agreement [DATA HERE] with California Air Resource Board (CARB) to shut down semi tractor rigs that were non-compliant with new California emission standards:

"As trucks are one of the largest sources of air pollution in California, EPA will continue to ensure these heavy-duty vehicles have the needed pollution-control equipment and operate in compliance with the rules," said EPA Pacific Southwest Regional Administrator John Busterud. "These companies have agreed to bring their trucks into compliance and operate more cleanly in all communities they serve."

Transportation is a primary contributor to the high levels of air pollutants in Southern California and the Central Valley. Diesel emissions from trucks are one of the state's largest sources of fine particle pollution, or soot, which is linked to health issues including asthma, impaired lung development in children, and cardiovascular effects in adults. Many of these trucks are older models and emit high amounts of particulate matter (PM) and nitrogen oxides (NOx).

[…] California Truck and Bus Regulation and Drayage Truck Regulation have been essential parts of the state's federally enforceable plan to attain cleaner air. California requires trucking companies to upgrade vehicles they own to meet specific NOx and PM performance standards and to verify compliance of vehicles they hire or dispatch. Heavy-duty diesel trucks in California must meet 2010 engine emissions standards or use diesel particulate filters to reduce the diesel particulates emissions into the atmosphere by 85% or more.  (read more)

In effect, what this 2020 determination and settlement created was an inability of half the nation's truckers from picking up anything from the Port of LA or Port of Long Beach.  Virtually all private owner operator trucks and half of the fleet trucks that are used for moving containers across the nation were shut out. 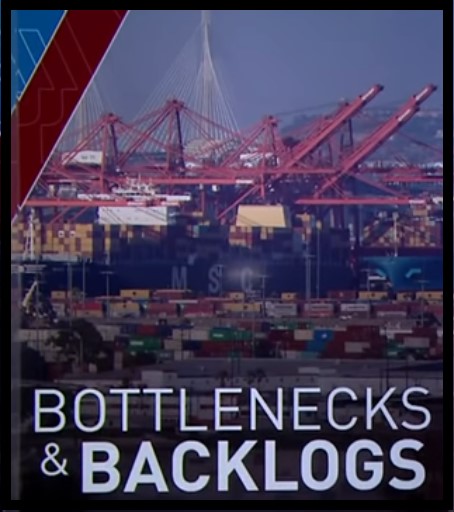 In an effort to offset the problem, transportation companies started using compliant trucks (low emission) to take the products to the California state line, where they could be transferred to non-compliant trucks who cannot enter California.   However, the scale of the problem creates an immediate bottleneck that builds over time.  It doesn't matter if the ports start working 24/7, they are only going to end up with even more containers waiting on a limited amount of available trucks.

Yesterday, in an effort to obfuscate and actually hide the epicenter of the issue, the White House put on a performance to provide political cover.  In a grand pantomime, Joe Biden met with the heads of the Ports of Los Angeles and Long Beach (Gene Seroka and Mario Cordero, respectively), and the International Longshore and Warehouse Union (ILWU).

The publicized meeting and White House conference was sold as Biden and Transportation Secretary Pete Buttigieg showing actions they are taking to address delays and congestion across the transportation supply chain in Southern California.

As a result of the meeting, the Port of Los Angeles (POLA) announced that it will join the Port of Long Beach (POLB) in expanding to 24/7 operations. POLA will add new off-peak nighttime shifts and weekend hours, nearly doubling its hours of operation. The ILWU said its members are willing to work those extra shifts to add needed labor capacity.

That publicly promoted action event was a complete political farce.   No amount of extra productivity in working the docks to off-load ships will solve the issue of trucks that cannot pick up the containers and distribute them toward manufacturing or warehouses.

As I noted, the issue started becoming visible several years ago when the California Air Resource Board (CARB) announced the new environmental regulations.  Several massive multinational corporations, with specifically in-tune supply and logistics operations, immediately recognized the issue they would face if 50+ percent of the trucking fleet would be blocked from entering California ports.

Yes, years ago the private sector predicted this would happen, and they started taking actions to protect their supply chains.  What these massive corporations did to reduce their exposure to supply chain disruption was to immediately formulate plans to divert their goods to other ports.   This was a very expensive shift in supply chain and logistic efforts for these massive corporations, which includes: Amazon, Walmart, UPS, FedEx, Samsung, The Home Depot and Target.

A long time before and during the era of the Trump administration, those massive multinational corporations knew they would need to redirect their import cargo quickly to avoid the bottleneck caused by California's new emission standards.  They began organizing new destination ports for their products and began setting up new hubs and distribution networks to avoid the predictable California port bottlenecks.

Obviously, for politically correct reasons; and in an effort to avoid the woke mob of environmentalist jackboots, the corporations didn't publicly share any of the issues they could foresee coming – they just worked independently and quietly to avoid the issue.

However, it costs more money to move and entire supply chain for trillions of tons of goods coming.  Hence, we saw prices climbing as a  result of increased transportation costs being factored in to the new logistics.  Did you hear about massive increases in container shipment prices?  Well, THAT'S WHY.  The entire supply chain from Asia to the United States was being modified from the closest port (California) to the ports where internal transportation would not be an issue.

Ships from China and SE Asia being diverted from California into the Gulf of Mexico or East coast have to go through the Panama Canal.  It takes twice as long and costs twice as much, if not more.  Hence, massive shipping price increases: 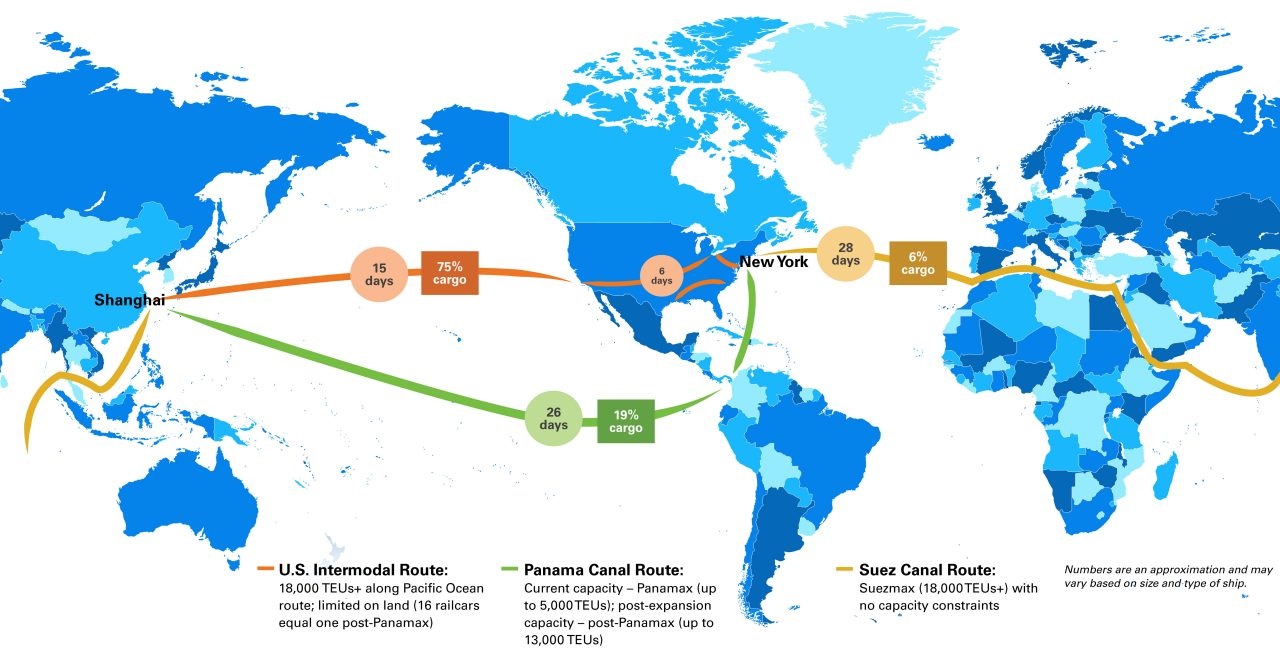 Unfortunately, small companies and small brokers of import goods do not have the control over their part of the supply chain from Asia to the West Coast.  They don't contract for entire cargo ships with thousands of containers.  Those wholesalers, brokers and smaller companies that feed raw material and parts supplies to manufacturing and smaller retail outlets are stuck waiting for their containers to get through the trucking issue in California.

The bottleneck at the Ports of Los Angeles and Long Beach run by Gene Seroka and Mario Cordero is not caused by a lack of longshoremen and dock workers to off-load the vessels.  The bottleneck is caused by half of the previous trucks used to enter the ports and pick up containers not being allowed.  Factually, it doesn't make a tinkers damn worth of difference if the port works 24/7/365.   The ports are simply running out of space.

This California bottleneck has been building, and building and building for years, until now it has reached a crisis point.

If you want to know how long this has been taking place, take the time to watch this video of a trans-continental shipment belonging to Amazon Inc from China.  As you watch this really good discussion, think about how long Amazon Inc. has known about the problem in order for them to have put such a massive solution into place in order to avoid California.

Yeah, this California emissions issue has been identified for years, and Amazon has been planning to avoid it for years.  WATCH: