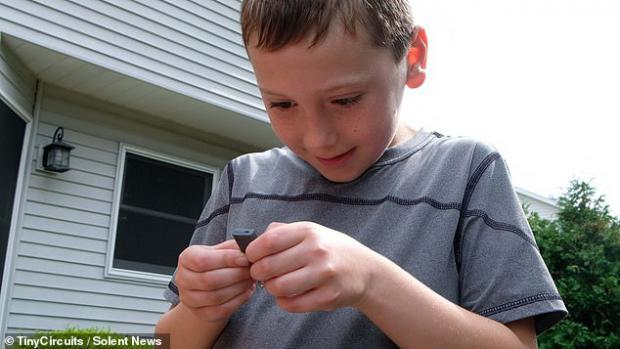 The world's smallest handheld games console has been developed by US engineers and is about the size of a postage stamp, but plays just like a full-size device.

The 'Thumby' console from Ohio-based TinyCircuits comes with five retro games pre-installed, including tiny takes on classics like Tetris, Space Invaders and Snake.

Users can even create their own games using the MicroPython programming language and play multiplayer games with others, by means of a linking cable.

The console is being sold on Kickstarter from £14 ($19) for a basic grey model, with other colours and additional accessories like linking cables also available at higher prices.

Each Thumby sports a working battery, buzzer, gameplay buttons, power switch, screen and a micro-USB port to charge the console and update its software.

The screen is an OLED display and a loop on the bottom-right corner of each tiny, Game Boy-like console allows it to be attached to a keychain just like a keyring.

'When people see tiny, they think cheap. We designed a high-quality product with a powerful processor that defies its size.

'Thumby started out as my personal project, but as we saw people's reactions to the prototype, we knew we wanted to make it into a new TinyCircuits product.'

This, he added, will allow 'more people can put it on their keychain, enjoy playing it, or even create their own games.'